What is an FPSO? 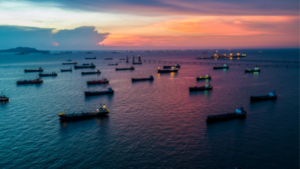 Let’s start with the basics – what is an FPSO? A Floating Production Storage and Offloading (FPSO) installation is a floating vessel. It is generally found as part of a converted oil tanker hull.

FPSOs are used for processing and storing hydrocarbons that arrive on the facility from sub-sea oil wells or nearby platforms. The equipment on the vessel is designed to separate and treat crude oil, water and gases. FPSOs also have storage capacity so the treated oil can be transferred directly to refineries. This lessens the need for long pipelines to transport the oil to shore.

The purpose of an FPSO is so that oil companies can process oil in much more remote areas and in deeper water than other technology would allow.

History of the FPSO market

The history of the FPSO market can be traced back to the late 1940s when offshore oil production originally started. Oil platforms initially had to be on the seabed but as exploration became more varied and reached deeper waters during the 1970s, floating production systems were required.

The first ever FPSO as they are known today was built in 1977 and was located in the Spanish Mediterranean.

Hundreds of FPSOs are now used worldwide and the answer to the question ‘what is an FPSO’ has become more varied. Many different sizes and formations are now in circulation.

Certain companies, like Petrobras in Brazil, have become known for their use of FPSOs and have become specialists in that particular field of oil exploration and production.

Reduced exploration budgets in 2014 and the concurrent reduction in oil prices meant that the need for FPSOs dropped. This subsequently decreased the number of FPSO units being produced and used in all regions around the world.

During 2017, oil prices started to rise again, buoying the offshore industry and increasing the amount of spend within the market. This has resulted in new exploration projects and the number of FPSOs being commissioned has therefore started to rise.

The FPSO Congress took place in February 2019 in London, with more than 150 delegates in attendance from all over the world. Topics discussed were varied but the overall theme was how to guarantee growth in the future FPSO market.

It certainly does appear that the market is recovering. Since mid-2017, exploration projects have started up again, the wheels of production are turning, and major discoveries are beginning to be announced.

This is linked to global growth in demand for drilling and well services. The total number set to be drilled and completed in 2019, up 3% on 2018.

General consensus seems to be that although large FPSOs might be a thing of the past, smaller FPSO vessels are on the rise. These vessels are quicker to build, cheaper to produce and therefore more accessible to the market.

According to independent analyst and business intelligence data firm Rystad Energy in February 2019, the number of new FPSOs set to hit the market between 2019 and 2022 is more than 30. The greatest demand comes from South America, followed by Asia, Africa and Europe and, finally, Australia.

The majority of analyst companies agree that South America, and in particular Brazil, will lead the way in the FPSO market in the coming years.

There are some projects of particular prominence in South American that will undoubtably use FPSOs. These include:

If you are talking about South American and what is an FPSO, then you cannot help but comment on Brazilian oil company Petrobras. Petrobras is historically the most prominent user of FPSOs in the marketplace and is somewhat of a specialist.

The company is a semi-public Brazilian multinational petroleum corporation and is headquartered in Rio de Janeiro. Petrobras is a giant in the industry and controls significant oil and energy assets in 16 countries across Africa, North America, South America, Europe, and Asia.

In December 2018, when presenting its business and management plan for the upcoming five-year period, Petrobras announced that it had set aside $84 billion dollars to spend between 2019 and 2023. Most of this investment will go on Exploration and Production. The operator stated that it planned to boost output by starting the production of 13 new FPSOs.

In April 2019, leading data and analytics company, Global Data, increased this number of FPSOs. It stated that Petrobras is expected to deploy 17 planned and announced FPSOs globally from 2019-2025. Unsurprisingly, this is the highest number among all operators worldwide.

Petrobras’ focus will be on the development of production in deep waters. This explains why the company has such a need for specialist FPSOs that can reach the oil in these areas and extract it accordingly.

The majority of Petrobras’ new FPSOs are expected to be deployed to develop the subsalt reserves in offshore Brazil.

Special Piping Materials is able to supply and stock many materials and parts that are required for the production of FPSOs. Speak to our expert team today about our high quality products.