Singapore’s energy sector has been a fascinating one to watch over the past 50 years. When this sovereign island city-state became independent in 1965, its transformation began.

Over the past 50 or so years we have seen Singapore’s energy industry develop exponentially. They have moved from oil to natural gas and have also started to increasingly use solar energy, particularly on rooftops and in reservoirs. 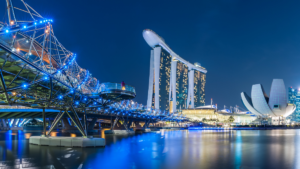 Although Singapore doesn’t produce oil domestically a few Singaporean companies are heavily involved in overseas exploration and production. This includes Singapore Petroleum Company which is the country’s biggest national energy firm and is a subsidiary of Chinese state-owned company PetroChina

The energy sector in Singapore is controlled by the Energy Division of the Ministry of Trade and Industry. They work to determine the strategic energy policy in Singapore, and it has the policy goals of ensuring economic growth, energy security, competitiveness and sustainable development.

Special Piping Materials has been working within the Singapore energy sector for many year and has worked with many of the specialist suppliers within the supply chains. We even supplied one of the key components of Singapore’s famous helix bridge (pictured above).

Singapore’s location has long been the envy of many other countries. Many would say that it is strategically placed between the Indian and Pacific Oceans and this, combined with its proximity to the Strait of Malacca has allowed it to flourish in recent years across many sectors.

It certainly is part of the country’s strong energy infrastructure and has led to it becoming one of Asia’s major petrochemical and refining centres and oil trading hubs.

Further to this, over the years, Singapore has also developed a world-class refining, storage and distribution infrastructure. The area of Jurong has become the veritable centre of Singapore’s petrochemical and heavy industries.

In the long-term, the Singapore government has plans to encourage growth in its ability for refinery work and capacity for oil storage. This will allow it to sustain its strong market leadership as an expert in oil refining and trading.

In 2019, an approximate 3.55 exajoules of primary energy were consumed in Singapore. This energy was made up of a mix of coal and peat, petroleum products, natural gas and electricity generation.

In terms of the divide in these resources, petroleum products made up more than 60 percent of the primary energy consumption in the country while electricity generation was 29 percent and natural gas was 10 percent.

The industry sector in Singapore is particularly dependent on fuel supply, having consumed about 74 percent of the petroleum products used across the country.

Approximately 95 percent of the electricity consumption in Singapore was derived from natural gas, with the remaining 5 percent coming from renewable sources, petroleum products and coal.

The use of renewable sources in Singapore has yet to take off properly (mainly due to lack of physical space in the country) although there are plans underway to get this going. An interesting project has to install solar panels on many of its high-rise rooftops which, given the many hours of sunshine that Singapore enjoys each year, could well pay off.

Importation of Oil and Gas

Singapore heavily relies on imported pipeline and liquefied natural gas which is a situation that is unlikely to change any time soon. This is because Singapore has no indigenous hydrocarbon reserves and therefore must obtain them from elsewhere.

One of the things that Singapore relies on imported natural gas for, is its electric generation. The majority of this is imported from Malaysia and Indonesia through a vast network of pipes. It also arrives in the country in the form of liquified natural gas (LNG) from around the world via the infamous Singapore LNG Terminal which was first opened in 2013.

To counteract the amount of materials Singapore imports, the country is currently working to expand its existing LNG importing facility in a bid to become a major LNG trading hub. The location and reputation of Singapore is a big factor in this as it is well placed to being Asian LNG buyers and sellers together.

To bolster this, Singapore has also taken big steps towards liberalising the gas market in the region. The aim is to create an efficient, transparent and well-operated domestic gas market.

This type of move is typical of this forward-thinking country and the innovative strategies of Singapore’s energy sector is something that has long stood it apart in Asia, with this looking set to continue.

Singapore energy policy has an impressive set of objectives to achieve by 2030. This includes improving the country’s energy efficiency by 36 percent (from its 2005 level) and reducing the country’s greenhouse gas emissions by 16% below BAU level.

Some of the ways the country is hoping to achieve this is by introducing energy efficiency standards, labelling for lamps and increasing solar PV capacity.

To further address the desire to become ‘greener’, Singapore has plans to harness energy from solar, natural gas, regional power grids and low-carbon alternatives. Solar energy is definitely the country’s best option here as the country’s geography and climatic pose problems to any wind or hydroelectric projects. By 2020, Singapore is aiming to achieve at least 2-gigawatt peak (GWp) of solar energy which would be enough to power around 350,000 households per annum.

Energy efficiency is also a priority for the city-state, with the government aiming to install advanced electricity meters in households island-wide by 2024. This is so their electricity usage can be monitored via the Singapore Power Utilities mobile app and thus improved upon.

To support this on a business-sense, in 2018, an Industry Energy Efficiency Package was established in order to provide funding support for companies so they can adopt more energy efficient technologies and reduce their carbon footprint.

It seems likely that Singapore will continue down these two themes for many years to come – energy efficiency and the minimisation of carbon emissions. Balancing this while also providing security of supply and meeting exponential demand growth will be complex but Singapore has proved time and time again that it is capability of overcoming whatever challenge it faces.