6% Moly is just one of the very specialist materials that we stock. As one of the world’s leading stockholders and suppliers of high-performing pipes, fittings and flanges, Special Piping Materials (SPM) is an expert in knowing the advantages and applications of different materials grades.

6% Moly is no exception to this, and SPM is able to source a very wide range of products in this material. But what is it and where did it originate from? Read on to find out exactly what is 6% Moly, what benefits this material has and in what scenarios it can be used. 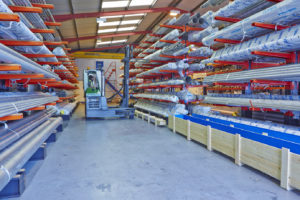 So, what is 6% Moly and where did it originate? ‘Moly’ is an abbreviation of Molybdenum and a 6% Moly Alloy is a metal consisting of two or more metallic elements, where at least 6% of the metal content is molybdenum. Alloys are usually created to create a material with enhanced properties such as greater strength or a greater resistance to corrosion.

The silvery-coloured Molybdenum is often chosen as an alloying ‘partner’ due to its extremely high melting point. It has the sixth-highest melting point of any element in the world and as such it is often involved in situations where it has to withstand extremely high heat. Subsequently, pure Molybdenum can be found in placed like heating elements in furnaces, aircrafts parts, filaments, military armour electrical contacts or even as electrodes for mercury vapour lamps.

When it is used in the production of an alloy, molybdenum is typically chosen as it can increase strength, electrical conductivity, hardness as well as resistance to wear and corrosion.

6% Moly Alloys also contain high levels of chromium and nitrogen which also add to their ability to withstand corrosion and stress cracking. They are part of the austenitic steel group which is the most commonly used grade of steel and is known for good formability and resistance to corrosion.

Molybdenum was originally discovered by a Swedish Chemist Peter Jacob Hjelm who named the metal after the Greek word ‘molybdos’ which means ‘lead’. According to the Royal Society of Chemistry, the new element was first announced in the autumn of 1781.

The group of 6% Moly alloys were first created in the early 1970s. This was due to a demand for a relatively cost-effective alloy that also had the property of significant resistance to corrosive brackish water and seawater environments.

The main industries that drove this need for a new alloy were the power generation and nuclear power industries. The other alternatives in the market were considered to be either too expensive or not resistant enough to corrosive environments.

6% Moly Alloys are specifically created for their range of beneficial properties. These properties mean that 6% Moly products, such a pipes, fittings and flanges, are in very high demand in industrialised, engineering and manufacturing markets. The most significant and beneficial property of it, is its ability to withstand heat much more than both steel and nickel-based so-called superalloys. If we are comparing it to other metals, it is also known as being much stronger than other austenitic stainless steels.

Specifically, 6% Moly is known for the following benefits and characteristics:

Obviously, this long list of benefits makes 6% Moly a very in-demand material, with specialist mills around the world gaining reputations for manufacturing this high-performing metal.

Alongside the long list of benefits of 6% Moly comes an equally long list of applications. Understandably it is used frequently in corrosive and extremely hot environments but where exactly is it used?

Special Piping Materials is contacted by end-users of 6% Moly on a nearly daily basis so here is an extensive list of applications where we have been aware of its use:

Over the years, Special Piping Materials has developed relationships with some of the leading manufacturers of 6% Moly products across the world. We have refined and carefully managed our global supply chain to ensure that only the best possible products are sourced for our clients. We are able to provide all of our products – seamless pipe, welded pipe, butt weld fittings, flanges, forged fittings, branch fittings spectacle blinds spades, spacers and bar – in high quality and durable 6% Moly.

If you require some specialised products, then be sure to contact your regional Special Piping Materials office today and speak to our knowledgeable sales team.