An overview of FPSOs

An overview of FPSOs, their origins, benefits, design and a look at what the future holds. 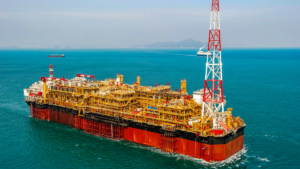 Floating production storage and offloading vessels (FPSOs) are used extensively across the offshore oil and gas industry and have established themselves as an essential part of the sector.

As indicated by the name, FPSOs are moveable floating vessels that are equipped to be able to process and store oil and gas. They carry a massive amount of equipment on board which means they can effectively separate and process the oil and gas that is transferred onto them from sub-sea oil wells and platforms.

Most FPSOs comprise of a ship-shaped vessel, with space on top for extensive processing equipment and vast storage space below decks. They are often kept in-place by complicated and robust mooring systems that allow them to operate in deepwater and ultra-deepwater hydrocarbon fields.

The enormous storage facilities onboard mean that vast amounts of oil and gas can be stored safely on FPSOs for considerable lengths of time. It is then offloaded onto tankers and pipelines ready for on-land transportation and distribution.

Special Piping Materials’ expertise with materials such as duplex, super duplex, 6% moly and nickel alloys mean that we are well-placed to source and supply many of the components that are essential for the building of FPSOs. We have worked closely with many clients across the globe to ensure that their FPSO projects are a success.

But where did FPSOs originate from and what are the designs like? What are the benefits of FPSOs? And finally, what does the future look like for FPSOs?

The first ever FPSO was originally an oil tanker that was converted by Shell in 1977. Prior to this, hydrocarbons were only extractable from relatively shallow fields, with a water depth of no more than 50 metres. Once extracted, oil and gas had to be transported to land via subsea pipelines which, understandably, are economically unviable when the hydrocarbon fields are many miles away from the shoreline.

Prior to modern-day FPSOs, floating storage and offload units (FSO) were used to store oil and gas and transport it from remote locations. These vessels were useful but were unable to process the oil and gas which is one of the main advantages of an FPSO.

To look at, most FPSOs are very similar to supertankers and indeed many FPSOs are converted tankers. However, the defining difference of an FPSO is the large processing equipment that is located on the vessel’s deck (the storage equipment is usually in the hull).

The processing equipment on a FPSO is often built in modules and consists of water separation, gas treatment, oil processing, water injection and gas compression equipment. In addition to all this and the extensive storage facilities, FPSOs also need to have living quarters on-board for staff, along with control rooms, offices and recreational facilities.

The oil that is stored onboard obviously needs to be unloaded when required and this takes place quite often. In order to transfer oil to shuttle tankers or ocean barges that are going ashore, a loading hose is needed. Moving oil from the stern of the FPSO to the bow of the shuttle tanker is a process known as tandem loading.

FPSOs have many advantages, which is why they are used so extensively by oil and gas companies. Overall, they give companies more freedom and versatility for their exploration and extraction projects, especially in remote areas.

Here is a breakdown of six key benefits of using FPSOs:

It is thought that the digital revolution has so far not been fully embraced by the oil and gas sector. However, it has to be said that the digitisation of some operational procedures has begun in order to promote efficiency and save costs.

Although it has been a slow start, many big oil and gas companies are increasingly turning to operational technology and information technology. This is because they are realising the benefits of things like ‘big data’, analytics, sensors and the ability to automate highly sensitive tasks.

Looking to the future, it is likely that FPSOs will soon have to incorporate new digital solutions. This will be things like fleet data and predictive analytics in order to better determine success rates, processing estimates and vessel fatigue.

Interestingly, by embracing digital tools, oil and gas companies are helping to make further efficiencies as it allows older vessels to be ‘upgraded’ and subsequently stay in service for longer.

Organisations are now able to collect data on their vessel capacity, mooring systems and processing procedures in ways that they never have done previously. This has the potential to make FPSOs even more valuable and widely used than they already are.