How are petrochemicals processed?

The petrochemical industry is worth billions and spans the entire world. The chemicals themselves are obtained from petroleum or natural gas but how are petrochemicals processed? 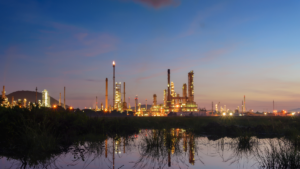 It is a process that can take many months, with many diverse systems required to derive the various different petrochemicals that are used across the world.

Special Piping Materials has been supplying the petrochemical industry for many years, with our Duplex and Carbon Steel products usually the alloys of choice due to their strength ability to resist to corrosion and price stability.

The duplex piping products we stock and supply are used for a variety of functions such as:

The team at Special Piping Materials understands that the products supplied to petrochemical plant operators have to be of the highest quality as they are relied upon to be perform in sometimes very harsh environments for many years.

All the Special Piping Materials pipes, fittings and flanges that help in how petrochemicals are processed are subject to scrupulous destructive and non-destructive testing and have to meet rigorous testing standards.

Petrochemicals are essentially chemicals that are have been created from petroleum or natural gas.

The demand for them is mainly driven by the requirements across the world for synthetic materials which are major components in modern economies and societies. This is because petrochemicals are essential parts of a myriad of products that are used by thousands of people on a daily basis. These include plastics, medicines, cosmetics, furniture, appliances, electronics, solar power panels, and wind turbines.

The six main petrochemicals are:

Factors like globalisation and the integration of the world economy have a big influence on the sector.

Investments into the industry are currently taking place across the world, with the main instigators in recent years being mainland China, the Middle East, and North America. There are a variety of reasons behind these investments including fast-developing markets and domestic energy feedstock advantages.

China has been focused on coal-to-chemicals production and on-purpose propylene processes, while the Middle East began to expand its petrochemical assets to take advantage of cheap and readily available ethane. In North America, they have recently restarted their developments in petrochemical. This is due to recent shale gas discoveries in the United States and Canada which means that the region is able to produce chemicals at a relatively low cost again.

How are petrochemicals processed?

Petrochemicals are made on extremely large scales. The petrochemical plants turn natural resources like crude oil, natural gas, ores and minerals into useful commodities that can be used for many applications and are used as crucial ‘building blocks’ for industry processes.

The processes involved in doing so include steam cracking liquid and gaseous hydrocarbons and then separating the products into the important raw materials. The technology used in these processes has become much more technologically advanced in recent years, meaning that the facilities that house this technology are increasingly large and complex.

The petrochemical processing procedure begins with a ‘feedstock’. This ‘feedstock’ is a raw material and is usually natural gas liquids and naphtha that are created from crude oil during the refining process.

The natural gas that is used as ‘feedstocks’ is first separated into ethane, propane and butanes and whichever one is chosen for the process creates a different end result. For example, ethane’s structure makes it the simplest of the hydrocarbons, and it can be transformed into novel plastics with extremely useful properties.

When processed, ethane undergoes a process called cracking so that it is converted to ethylene. Cracking requires very high temperatures to crack the bonds between carbons, which then form two bonds (also known as a double bond) with each other that make a new hydrocarbon molecule called ethylene.

Propane and butane can be subject to a similar cracking process to make propylene and butylene. In addition to this, they can also be processed through a newer process that plucks hydrogen atoms from them to form the same strong double bonds.

Ethylene, propylene and butylene are all extremely useful and highly sought-after materials because, along with benzene, toluene and xylenes, they are the fundamental building blocks of plastics. Fundamentally, they create much of the world around them – from bicycle helmets to car bumpers, parachute straps, seatbelts, space suits, medical equipment, clothes, furniture and even wind turbines.