The energy landscape in Latin America is definitely an interesting one. In recent years there has been a significant increase in the usage of, and investment into renewable energy sources. Alongside that, there has also been some major oil discoveries in the region, most notably in Guyana and Suriname. 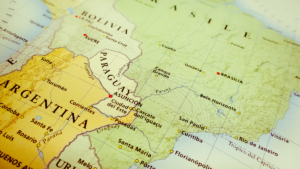 Latin America itself has a number of definitions in terms of what countries are included in the region.

For the purpose of this blog, ‘Latin America’ more broadly to refers to all of the Americas south of the United States, thus including the Guianas (French Guiana, Guyana, and Suriname) and the Caribbean.

In order to power the energy in Latin America, there must be a number of companies who are driving growth, exploration and distribution.

There are many ways of looking at size and success, but let’s look at profit. According to Latin Trade, Petrobras and Electrobras in Brazil and CFE in Mexico top the list of energy companies in Latin America in the context of which company generates the biggest profits. In 2019, all three companies reported impressive, and somewhat eye-watering profit surges:

But who are these companies?

If we look at it in a wider context, the world’s renewable energy capacity has grown by roughly 8% over the last decade. In more recent years, investment in this sector has flowed increasingly to emerging markets and a substantial proportion of this is going to Latin America, namely Brazil, Chile and Mexico.

Renewable energy sources, specifically hydropower, accounts for approximately 25% of the energy supply in Latin America. Across the region, things aren’t as coordinated as they could be, with policies, energy mixtures, and energy trade dynamics differing between the different countries.

Alongside the renewable energy streams in Latin America, Brazil, Mexico, and Colombia continue to be significant players in the oil and gas market, for both production and exportation. Argentina can join this list as well thanks to the discovery of vast reserves in the Vaca Muerta field of shale oil and gas.

Looking to the future it appears as though renewable energy and petroleum resources will continue to be combined within the overarching energy sector in Latin America.

News about energy in Latin America

What are the latest news stories to hit the energy sector in Latin America?

Irish oil and gas exploration company, Tullow Oil, has also had success in offshore Guyana, with their CEO, Paul    McDade, stating that “The whole area appears to be characterized by excellent quality reservoirs.”

In 2020, Suriname has also been the subject of elation with substantial discoveries being made in the offshore area Block 58. Apache Corporation has prioritised Suriname as it seeks to replicate Exxon’s success at the offshore Liza oil field in the Stabroek block in neighbouring Guyana.

Special Piping Materials has been working in Brazil and the wider South American region since 2010 and the team there now has a 12,000 sq. ft warehouse and office.

Due to our expertise and knowledge of the area, Special Piping Materials has supported several projects in and around Latin America, including work with some of the region’s oil and gas giants.

Our expert team is able to source and supply any specialist piping and fittings that are required in a range of exotic materials such as 6% Moly, Nickel Alloy, Stainless Steel, Duplex and Super Duplex.