Components of an FPSO

What are the components of an FPSO?

Firstly, ‘FPSO’ stands for ‘Floating Production Storage and Offloading’ and is essentially a floating vessel that is used for the production, storage, transportation and delivery of crude oil.

FPSOs are extensively used by oil and gas companies as one of the primary methods of processing and storing oil and are seen as an essential part of the offshore industry. Read on to find out more about FPSOs and SPM’s role in creating them. 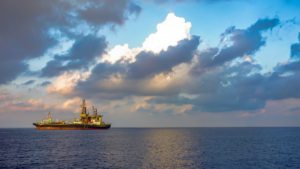 Interestingly, most FPSOs take the form of a super tanker and sometimes it can be tricky to differentiate between the two. Usually, an FPSO can be identified because the processing equipment is stored aboard the vessel’s deck, rather than below the hull.

FPSOs are often used in frontier regions where there is little to no local pipeline infrastructure to export oil.

The components of an FPSO

The main parts of an FPSO are:

The hull of an FPSO is the top of the ship that is above sea level. The hull of the ship is either newly built or it is made from the conversion of existing tankers. Often, hulls are designed to match project-specific conditions which can vary greatly depending upon the regions in which it will be operating.

The mooring system is an essential part of the FPSO as it is the equipment that ensures the FPSO safely stays in place, despite whatever forces, waves, winds, and currents it is faced with. Mooring systems comprise of mooring lines, anchors, and connectors.

The topside of an FPSO is the and gas processing unit at the top of the vessel. This component is designed and constructed to specific and rigorous offshore platform and refinery standard specifications (API & ASME).

The risers of an FPSO allow the vessel to move both vertically and laterally. The flexible steel reinforced risers are designed to absorb any motion which affects the position of the vessel by waves.

The FPSO turret can be found as an integrated part of the FPSO hull. The purpose of the turret is to help the hull to weathervane around the mooring system and the mooring line – it allows the FPSO to rotate freely while moored to different locations on the seafloor.

The turret is also especially important when the vessel is experiencing harsh weather conditions.

Some detachable turret systems allow the turret to be disconnected from the vessel but remain attached to the mooring lines on the seabed. This is particularly useful in situations such as hurricanes and storms, where the vessel needs to react quickly to external hazards.

Water, gas and oil have different densities. This means they can be split in a special separator, with gas rising to the top, water on the bottom and oil staying in the middle.

Other components of an FPSO system

Special Piping Materials’ expertise with materials such as duplex, super duplex, 6% moly and nickel alloys mean that we are well-placed to source and supply many of the components that are essential for the components of an FPSO. We have worked closely with many clients across the globe to ensure that their FPSO projects are a success.

Speak to our expert team today about your next FPSO project!